Dandelions are a hardy plant that grows all over North America, and an underappreciated plant.

Edible Parts: The entire plant is edible, roots, stem, flower, leaves, and all. It includes many macronutrients and is loaded with antioxidants, high in vitamin K, A, B, C and others.

Flavor: Bitter, although younger plants will not have as bitter of a taste.

Lobster mushroom is an orange-red capped mushroom covered in bumps twisting itself into odd shapes as it grows. Named for its resemblance to the shell of a cooked lobster. The flesh of the mushroom is white. It can be found in the new england area, and along the west coast.

Flavor: slightly sweet flavor reminds some people of the taste of a poached lobster.

Additional Survival Note: The great thing about mushrooms is all the different wild varieties have a wide range of flavors. It is why, high end restaurants will incorporate them into expensive entree dishes.

About 3% of mushrooms are poisonous, some of which have lasting effects on your nervous system or are fatal. That might not seem like a high percentage but as a survivalist I don’t want to roll the dice every time.

This is why I have a travel book I take with me to help me identify edible mushrooms.

Hazelnut shrubs are hardy and resistant growing all along the eastern parts of the U.S. from Louisanna to Quebec. They are big tall shrubs usually anywhere from 10-35ft tall. This is why sometimes people call them trees. You could call it either one.

Edible Parts: Hazelnuts..mmmmm.. Nutella. (Be honest that was your first thought). Hazelnuts can be eaten raw just like you would a pecan or walnut, but often they are consumed after roasting.

Flavor: Sweet, when roasted the sweetness of the nut is enhanced.

Health Benefits: high in protein, healthy fats, and fiber. Contain a variety of vitamins and minerals.

Rose hip is the round portion of the rose flower just below the petals. These are the fruit from a rose bush that starts to form after pollination. These grow all over north america.

Also known as seaweed. There are lots of different varieties of seaweed some tasting better than others.

Flavor: Tastes like lettuce grown out of the sea. A distinct crunchy texture.

Caution: Blue-green algae found in freshwater is poisonous. Also kelp can contain toxic metals when grown near industrial areas or other pollutants. Kelp should only be eaten when harvested out of a clean area of the ocean, not when rotting along the seashore.

Coneflower also known as echinacea is often found in teas for its medicinal benefits. It has a distinguishing characteristics looking kind of like a daisy but with a prickly center.

Health Benefits: Boosts immunity by increasing white blood cell count, it is also believed to reduce anxiety and has several other health benefits.

You’ve probably seen clover before as it grows all over north america. Green leaves with two shades of green one forming a distinct pattern typically of a clover leaf.

Caution: There are several varieties of clovers and some contain high amounts of alkaloids in the fall. Some people do not tolerate these organic compounds well so it would be smart to first test a small amount of clover and see how your body reacts. 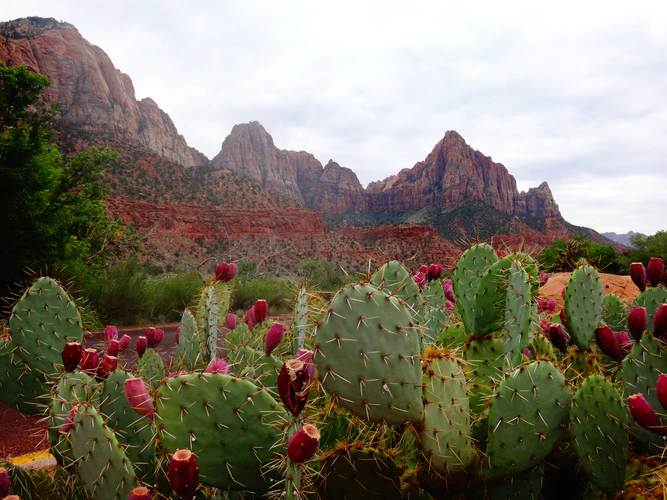 Prickly Pear Cactus can be identified with its several branches with flat broad pads. Grows mainly out west but it is a hard plant and can be found in other eastern states. As long as the soil is sandy well drained and it gets plenty of sunlight this plant will thrive. It blooms from early April To June

Edible Parts: Flesh inside the leaves and fruit, you just have to get past the pointees.

Flavor: Usually is sour but taste can vary

If you’ve ever eaten Tai food you know bamboo is edible. There are about 1575 known species of bamboo 110 of them are edible (1)

Caution: Some bamboo plants contain toxic amounts of cyanaogenic glycosides. The shoots should be boiled before eating.

Wild leeks also burdickii, ramsoms, or ramps are native to the eastern North American Mountains but are found west to Missouri up to Minnesotat and as far north as Canada. They grow in patches of deciduous forests in rich moist soil.

Flavor: similar to a green onion but more mild and delicate

Morels are a shroom prized for their delicious taste usually selling for around $30 a pound. The oblong bulbus coral looking characteristic makes them unique for easy identification.

Health Benefits: Contains highest amount of vitamin D out of any mushroom. High amounts of potassium, copper, and vitamins.

Caution: False morels are very toxic if consumed, and in some cases fatal. A false morel looks similar but can be distinguished. If you are unsure, just leave it be.

Elderberry native to the Rocky Mountains of North America. Elderberry is a moderate sized shrub with berries that grow like grapes in umbrella shape clusters.

Flavor: Depending on where they grow, their ripeness, they are tangy, tart, or sweet.

There isn’t a whole lot to it. One, you just need to be knowledgeable about what you’re looking for and where to find it. Will list some recommendations of guide books to help with this.

Two, you’ll also want to be sure you’re not foraging on any private lands. There are apps you can download on your smartphone to help with this. The most popular used by hunters is an app called onX hunt. There are others but onX hunt is the best as it can download maps to be used offline and will cache area that you’ve been to, as well you can get detailed information about every area in every state across the county.

The onX hunt app may seem costly to some but the amount of time it will save you, ease of use, peace of mind that it brings while hunting or foraging is a value worth well above the cost of the app.

Possibly the best book on identifying mushrooms; The National Audubon Society Field Guide to North American Mushrooms. Over 700 mushrooms with detailed articles and descriptive text. If you thoroughly digest this book you’ll be a mushroom expert and you’ll be able to identify all the common types of edible mushrooms.

A great with very detailed photos and descriptive text to assure you identify edible plants correctly is the Edible Wild Plants: A North American Field Guide to Over 200 Natural Foods.

Available as paperback or on kindle

We covered only a small amount of the hundreds of edible plants that are found all across the country. Terrible times are coming to this country, we can only debate how bad things might get. If things get really bad where food reserves are depleted or you have to hide for safety, your ability to survive may be dependent on your ability to hunt and forage.

Get prepared ahead of time, use an app such as the onX hunt app to identify public lands and practice your foraging skills. Do it as a cheap inexpensive recreational activity with the kids where you are all improving your survival skills.

Ezra’s Eagle I’m going to present to you a latter-day prophecy that to me is more applicable and exciting than any other prophecy, especially to

Aliens and Bigfoots Yeah that’s where we are going in this post.  There is a scriptural explanation for both these phenomena. Full disclosure, if the

Who are the Lost Ten Tribes? Where did they go? When will they return? What will they do? Ancient scripture answers these questions.

John The Beloved Is Still Alive

https://www.youtube.com/watch?v=LwFz5FDra9k After reading that title if you’re a Christian, or anyone really, you might be thinking whaaattt? Why? well, because most Christians believe John the

What is The Best Body Armor?

What is The Best Body Armor?  There are an estimated 393,347,000 registered firearms in the U.S. that is about 1.2 firearms per person, more than

Get Your Preparedness Guide

To inform you on how to prepare for the coming poo storm resulting government strive and civil unrest.

Info on how to prepare, current news, and prophesy applicable to our day.

World is Headed Towards a Socialist Pootopia

You're aware of this, but not sure how to prepare

That is why I designed a pdf to help you. It prioritizes and gives you the information of what you need to do so you can be prepared.